Your Wilderness is in Your Mind (A Lesson in Thankfulness) 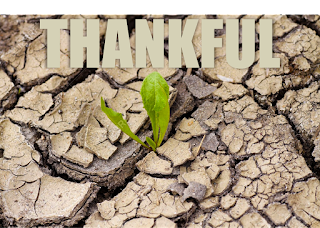 Over the last year, I’ve become increasingly more aware of what I release into the atmosphere through my words.  At one point in time, I can recall saying phrases like “I don’t have any friends”, “I am not needed”, “I don’t have enough money” on a very regular basis.  Being a very logical person, I could reason why I felt how I felt, so in my mind there was nothing wrong with stating the facts.  The challenge, however, became clear to me when I would say things like that to people who were my friends, who thought I was needed, or who knew I had funds.  These individuals would quickly point out the fallacy in my logic, leaving me stuck in a conundrum.  I have friends, but I ‘feel’ like I don’t.  I’m entrusted to many responsibilities, yet I “feel” useless, and I do have money, but “feel” like I’m in a constant financial strain.  Over time, I realized, my daily declarations were creating real feelings that did not actually match my reality.  The real truth was, I wanted additional friends to do certain activities with, not that I didn’t have friends at all, I did not feel appreciated for all my work contributions, not that I wasn’t useful, and I wanted to better budget to have more funds to do other things, not that I didn’t have any money.   Although, I knew what I really meant, I was unaware of what I was really saying. I was unconsciously conditioning my perception of reality with lies coming out of my own mouth.

This revelation led me to reevaluate the term “wilderness” and how it’s generally applied in a church sermon.  Being in a wilderness usually means one is going through a hard time in life, but is that it?  Can one be in a wilderness if everything in life is going swell?  The Israelites journeyed through a 40-year “wilderness” to get to the Promise Land.  Along the way they were met with challenges, but they also had shelter, food, clothes, protection, cloud/fire to guide them, and strong leadership during the journey.   Over the course of 40-years, the bible records no account of them being in extreme need of anything.  Despite having all they needed, they were very unhappy. So what defined their wilderness, their actual situation or their view of the situation?  Their constant complaints about life fueled their unhappiness, and ultimately led to the delay in their promise.  Had the tribes of Israel focused on their actual good fortune they would have reached the Promise Land sooner, but much more than that they would have simply been happier during the journey.

Remember how the LORD your God led you all the way in the wilderness these forty years, to humble and test you in order to know what was in your heart, whether or not you would keep his commands. Deut. 8:2 NIV

Does it take 40-years to learn humility, or anything else for that matter?  I know the answer varies person to person, but as for me, I do declare, it will not take me 40-years to learn any one lesson.  Whatever lessons I will learn, I know through the journey, God will supply all my needs according to his riches and Glory, and I shall not lack for anything.  He plans to prosper me and not to harm me, plans to give me hope and a future.  As long as I remain in Him and He in me, I will bear good fruit in my season.

What do you need to declare today?  What situations have you speaking death instead of life?  Reflect on those things and choose to speak life over them.

Posted by Unknown at 8:51 PM No comments: