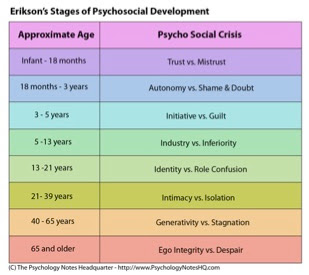 I was listening to a sermon when the speaker said that the spirit of offense is born in a person between the ages of 3 and 10. I do not know the source of that fact, but I entertained the thought enough to do my own research. After a few Google searches, I found myself reading Erik Erikson’s Theory of Psychosocial Development, which states that children develop their sense of self-confidence between the ages of 5 and 13.

“The failure to master trust, autonomy, initiative, and industrious skills may cause the child to doubt his or her future, leading to shame, guilt, and the experience of defeat and inferiority.” (Source)
These types of feelings are likely to cause anyone, child or adult, to offend easily. When you are not confident in who you are, you become susceptible to believing the lies that you or others declare over you regarding your identity or your life’s purpose. Insults such as “You are fat, dumb, worthless, ugly, unaccomplished, etc.” are all lies that can attack self-confidence at any stage of life. I’ve noticed that those who appear to have a strong sense of self are driven toward success by the negativity surrounding them. Others ultimately end up feeding into the negativity and developing less successful ways of coping.

Before the age of 30, I missed developing self-confidence. As a result, I struggled to define myself for a long time but adapted by placing my identity and purpose in my intelligence and gift of service. No one could tell me I was not smart and that I was not a great helper. However, this created a challenge because I set myself up to solely foster working relationships with people in my adulthood. When you sell what you do instead of who you are, people will seek you out for what you do. Projects, tasks, and skill sets were the only things that kept me connected to the majority of the individuals I knew. I wanted more personal connections with people, but I didn’t know how or to whom I was asking them to connect. I knew who I wanted to be more than I knew who I was. In my mind, outside of acts of service and being smart, I wasn’t anyone worth knowing. It became increasingly difficult to break out of the box. I prayed to God to give me a clear vision for the person I had yet to become – who He desired me to be.

My first hurdle involved what T.D. Jakes, in his book entitled Destiny, refers to as “internal streams of critical commentary.” I had to address my inner me (enemy) or negative self-talk. Oftentimes, I assigned negative intent to situations and was overly critical of others and myself.  I refused to allow myself to believe I was valuable. To begin the journey of renewing my mind, I had to actively and regularly use prayer, accountability, and God’s Word.

Prayer
“For the weapons of our warfare are not carnal but mighty in God for pulling down strongholds, casting down arguments and every high thing that exalts itself against the knowledge of God, bringing every thought into captivity to the obedience of Christ.”
2 Corinthians 10:4-5 (NKJV)

I was not good at praying for myself, especially during hard times. The more distressed I was about something, the more I shut down, closed up, and didn’t reach out to anyone – not even God. Prayer, however, was essential in helping me 1) release control from thinking I had the power to help myself; 2) mitigating the lies in my head; and 3) releasing power, God’s affirming Words over my life. I had to develop a new routine to pray in all seasons whether good or bad.

Accountability
“Confess your trespasses to one another, and pray for one another, that you may be healed. The effective, fervent prayer of a righteous man avails much.” James 5:16 (NKJV)

I had an accountability partner, however, my struggle with trust often hindered me from reaching out to this person when in immediate need. My delayed outreach stunted my progress and made me more fearful and ashamed to speak up about my “little” issues. An accountability partner, while a necessity and great support during any change process, should never be looked at as the sole solution. S/he cannot fix you, but should minimally be someone who can hear you out and pray with you.

Word & Faith
“For assuredly, I say to you, whoever says to this mountain, ‘Be removed and be cast into the sea,’ and does not doubt in his heart, but believes that those things he says will be done, he will have whatever he says.” Mark 11:23 (NKJV)

I needed an overhaul of my faith. All the scriptures I knew had merely become memorization exercises. I did not use the power in these verses to speak life into anything I was struggling with. So I began reviving those scriptures in my heart. I said them daily, read them out loud, and hung them on the wall. I declared them until the power of the words resonated within me again. “He will keep you in perfect peace, whose mind is stayed on Him, because he trusts you!” (Isaiah 26:3, NKJV) “The Lord is my shepherd I shall not want!” (Psalm 23:1, NKJV) “He will perfect that which concerns me!” (Psalm 138:8, NKJV)

Thus, the next time you find yourself being offended, take a moment and think about what inadequacy or unhealed wound(s) the person just spoke to. My pastor often says, “True humility knows no humiliation.” If you do not believe you are a failure, someone calling you one should not faze you. Discover your areas of offense, acknowledge whatever hurt happened to create that sensitivity, and begin the process of renewing your mind in that area.